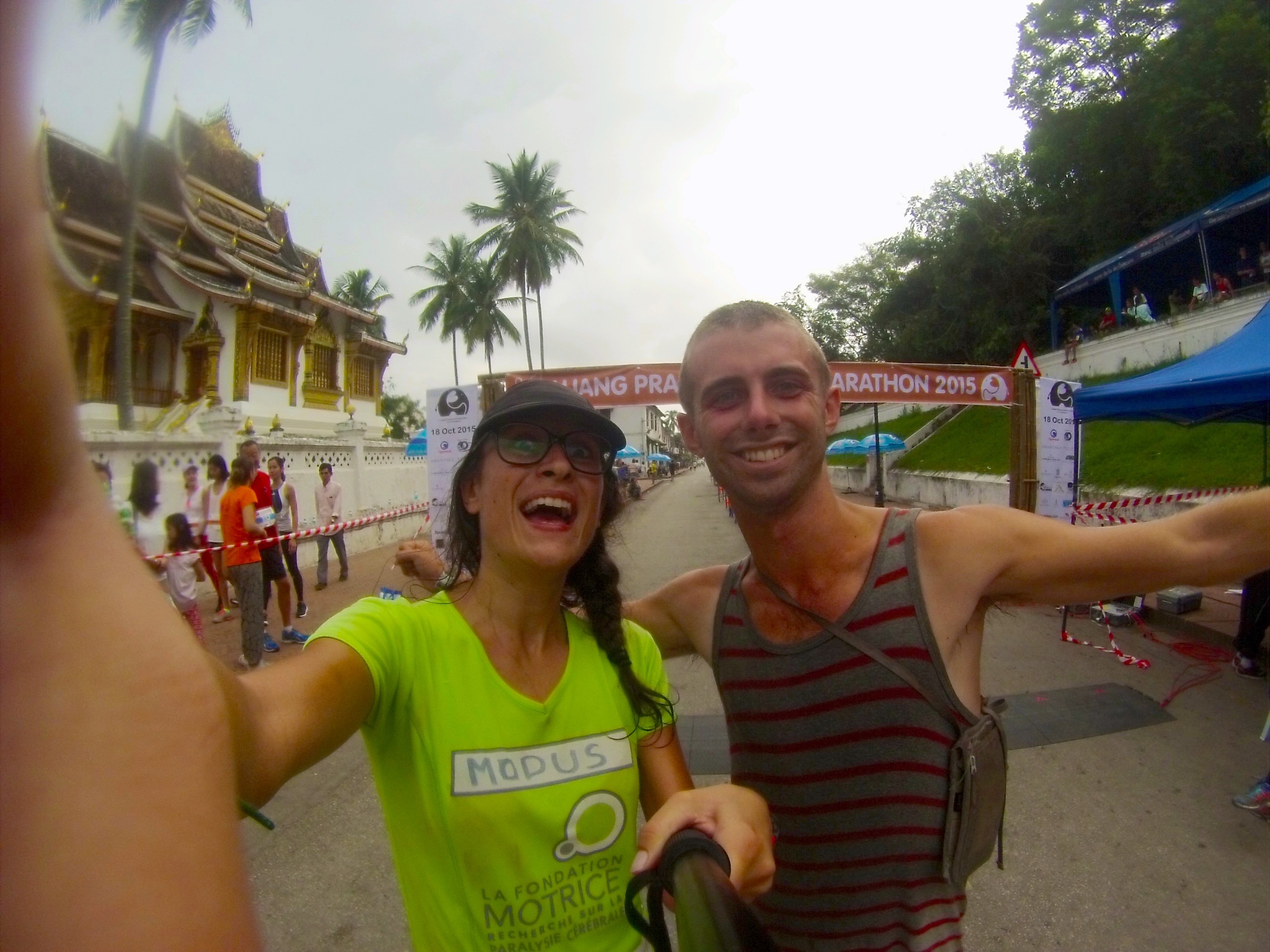 Even every race as it own story, this one is a kind of special. Why ? I would run an half marathon instead of a full one. My fears were not as big as for my last race which was one of the toughest I had ever did. I had even damaged one of my knees… I need to be careful because I still have more than one year before coming back to France.

For this race, for the second time, I managed to make run another person: Aurelio, a New-Zeleand guy who travelled all around South East Asia by hicthicking. This time my race was more unusual because he challenged me to bungee jump if he ran. Just to remind you that I have a fear of heights ! Good challenge for me… Gloups! I would respect it if he ended the race.

One more time, I almost did not participate to this race. Arrived one day before to take my number, my name was not on the runners board list. Coming all this way and to be forgotten… What a pitty! Hopefully, one Laotian women from the organisation moved heaven and earth to find me a new number. For sure I would run tomorrow!

Before running, very important, to organize a pasta party! Jean Baptiste and Valerio that I met few days earlier joined this traditional event that every runners know. During the pasta party, each one of us speaks about his/her feelings about the tomorrow race: how to handle the race, fears, time objectives, …. A time to release all the pressure before the D day.
We went around all markets to find pasta and side dishes. When I say pasta, forget about fresh italian pasta… But when you are abroad, you realize that you become a very adaptable person. We even offered to our guest house host to join us. One of the first time for them that they actually ate pasta. Not really surprising in Asia…

As the distance was shorter, I did not take my camel bag. I would leave without anything except my GoPro to share my race with you.
Morning was just raising, we started to run, it was 6:00 am. Aurelio began to run on his own, we planned a meeting point at the end. I had analyzed the race and realized that I would have to run three laps… Running like a rat in a cage, my favorite thing when I run!
Let’s focus on the race and my two objectives : running for La Fondation Motrice and ending in less than 2 hours. I was feeling good, I ate bananas and peanuts that morning to have energy. It is going to be alright!

First lap, I passed trough a lot of tourists and a few locals. Aslo, I had received a lot of greetings from Laotian people all along the road. Most warmful and touching of all, children on line who screamed « Go for it, Go for it ! »
Unfortunately, we could not see the sun rising because it was cloudy but I had realized that I run in one of the Unesco historical site and near the Mekong river!

Ending my first seven first kilometers, I monitored my pace to stay focus on my objective. My knee did not hurt me, I felt great! I passed through all the same persons and saw in front of me Aurelio. I was really happy for him because he ran even without the proper gear: trekking boots and coton clothes. That is what I like in running, when you want to run, everything is possible!

At the end of the second lap, at the 14th kilometre exactly, I felt the heat and humidity. I congratulated the ones who ended as I was going for my last lap. I had now a new routine: seeing all the children, enjoying the outdoor shower, passing next to all the same people who were encouraging me for the third time. Final effort, I could see the finish line. As I planned, I ended my race in 2 hours. In almost 3 years of running, on the same distance, I ran 30 minutes less than before. I remind my first half-marathon and could not help to think what I was think at this time : « Please kill me! » Running, training and motivation to go further give you wings. Next objectives: Running under 2 hours and bungee jump in New Zealand !

If you want to support La Fondation Motrice as I do during all my races, visit http://www.alvarum.com/worldwildrunneuze.

If you want to participate to this race, it takes place end of October. You can also go for the 7Km or 14 km. Go on Luang Prabang half marathon website or send me an e-mail to worldwildrunneuze@gmail.com, if you want to have more information.

Do you know Cambodia?

On the road to Malaysia!

My journey from Hanoi to Ho Chi Minh